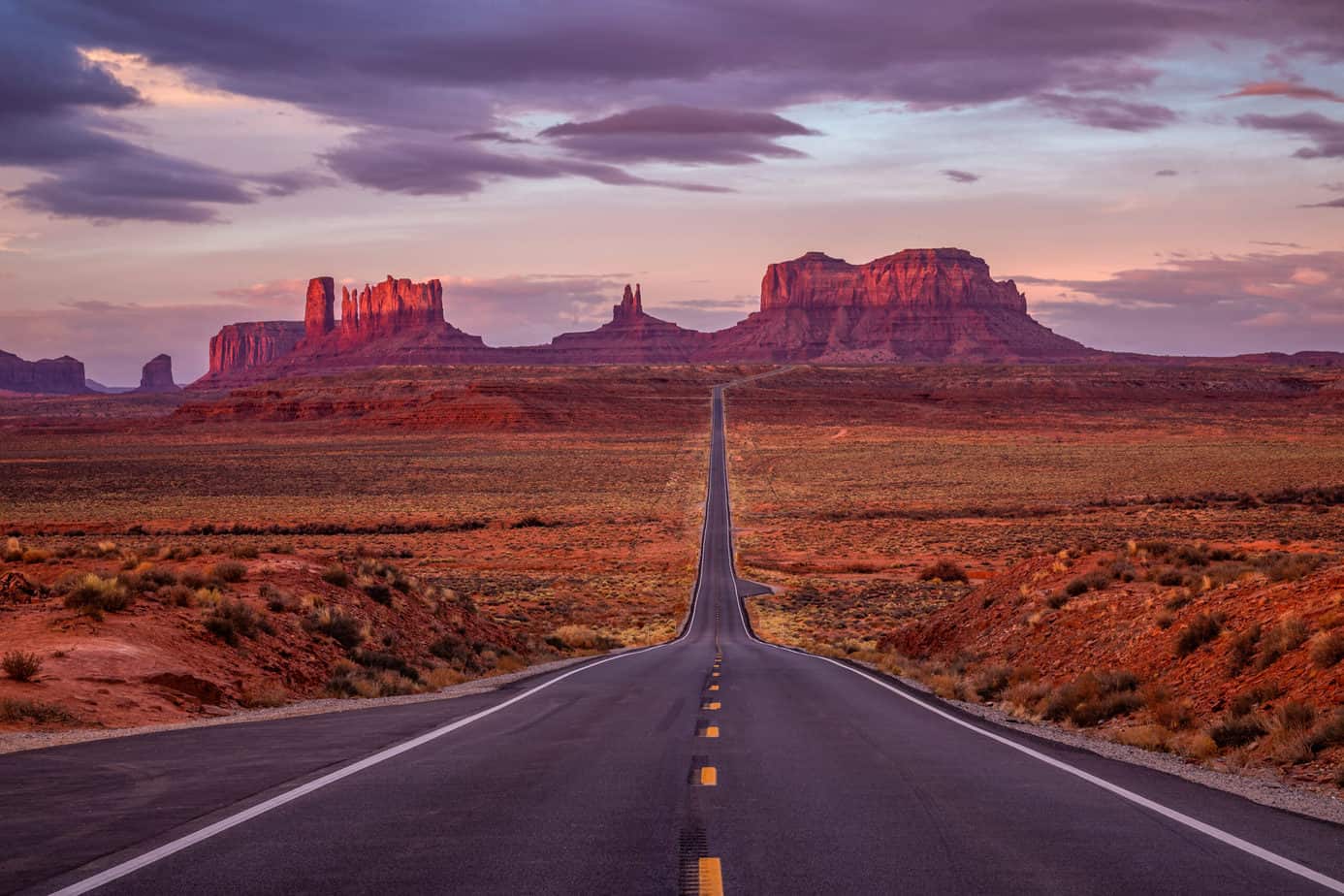 As travel lovers, we’ve done a lot of moving around over the years, and music has been our constant companion. This Fourth of July, we’ve found ourselves back in our home country, the USA. What better way to honor our nation than with a selection of great music? A classic USA road trip playlist.

Hitting the road in the states? Bring along this playlist!

This is a list of fifty songs, one for each of America’s fifty states. We played fast and loose with our choices. Some of these songs directly involve the states in which they are set; some barely mention them. The country music genre is quite fond of naming songs after states and exploring life in those places, so country songs are strongly represented here, but rock, hip hop, and soul are present too. We hope you enjoy, and to our fellow Americans, have a fun and safe Fourth of July!

Need to rent a car for your adventure? Check out holidayautos.com to find a great price.

Psst: Packing for a road trip of your own? This packing list is a must!

Can’t say no to this one! Still a classic, although the jazz standard “Stars Fell on Alabama” was a strong contender.

By the Time I Get to Phoenix – Glen Campbell

A lovely, sad song by a country legend.

This is a bluesy rocker about surviving life in a small town where you don’t fit in. Sometimes, you have to escape if you can.

This needs no explanation. It’s been performed by a lot of artists, but our favorite is Desi Arnaz’s version with the cast of I Love Lucy. Get your West Coast road trip started right!

Check out an entire list of the best songs about California here.

You’ve heard it a million times, but it’s still so pretty!

One of the older picks on our list, this is a swell duet with Bing Crosby and Judy Garland. Includes the only shout-out to Yale University we’ve ever heard in a song.

Another rock song full of Thorogood’s famous slide guitar work. Not much connection to Delaware outside of the title, but what state wouldn’t be proud of this one?

This song about an attempt at a wild, carefree life is more openly melancholic than Buffett’s bigger hits.

A beautiful soul hit about returning home at last and sacrificing for the one you love. Everyone can relate to that.

Doesn’t get much more fun than this. Odd and amusing in that unique ABBA way.

Another “coming home” song, this one of a more ambiguous, even haunting variety, despite the catchy country twang.

On a lighter note, here is a jaunty, piano-filled number from a couple of country/rock greats.

Goin’ Back to Indiana – Jackson 5

Speaking of jaunty, this is the Jackson 5 at their most energetic and charming–and that’s saying something.

In this tune, William’s beautiful voice and lonely guitar are perfectly emblematic of the bittersweet nature of love.

One’s on the Way – Loretta Lynn

I hadn’t heard much of Lynn before, but this song made me a fan. It’s about the need to put aside the distractions of the rapidly changing world outside and remember the things that need doing at home.

It is rock? Country? Whatever it is, it’s a great, insightful love song.

A favorite of Amy’s, this is a twangy rock number about a man from the bayou who is… unique.

A tear-jerking breakup ballad about a town in Maine far away.

Together in Maryland – Tony Cavallo

This one rocks! A song about loving what you have and where you are.

When we decided to make this list, this was one of the first songs that came to mind. We never get tired of it, and it’s hard to think of a song more closely associated with Massachusetts.

The Wreck of the Edmund Fitzgerald – Gordon Lightfoot

The tale of a real-life maritime disaster, this is slow nautical ballad is perfect for the state of Michigan, to which the unfortunate ship hauled cargo over Lake Superior.

Hip hop duo Atmosphere laid down this sweet track, an ode to their city of Minneapolis and and to all of the lesser-known towns where people make their lives.

Down in Mississippi – Sugarland

This country rocker is all about having a good time down South. Happy Fourth of July!

It wouldn’t be a playlist about America without Johnny Cash. This one is just him and his guitar, but that’s all he needs.

In this song about rest and longing, Hank Jr. finds the perfect setting in the wide open spaces of Montana.

An eighteen-year old kid has come to Nebraska with hopes of being a football star. A lovely song about chasing your dreams wherever they lead.

In honor of the Two Drifters’ current home, we chose this beauty. Its haunting and hopeful lyrics conjure the deep woods and cold winters of the Granite State.

Can’t leave Bruce out! This New Jersey native is the clear choice to represent his state.

With wild lyrics and wilder riffs, this prog rock/metal band are an odd but compelling fit for the unique landscape and culture of New Mexico.

Not much contest here! This song still feels inescapable, and for good reason.

Sometimes, cities are great; sometimes not. Doc Walker reflects on the girl he followed to Nasheville as she hunted for stardom–and how, in the end, he left her behind to come home.

Neil Young’s take on the Kent State shootings of 1970 is a blistering rock song.

Sometimes, no place is as comfortable as your hometown. Carrie Underwood reflects on the past in this ode to small-town Oklahoma.

This song set in Oregon captures an old timey folk/blues sound that is nothing if not American.

We tried to avoid songs about individual cities in favor of those about states, but this one is too much fun to leave out.

Holiday in Rhode Island – The Softies

Good times and dreary weather? New England has both, and so does this beautiful, wispy tune.

A bit of classy swing for the Palmetto State. In what has turned about to be a recurring theme on our list, this one is about longing for the comforts of home and a simple life.

The lovely harmonies of this track only accentuate the escalating bleakness of its lyrics. A song about one of the many people who find themselves on the darker side of the American experience.

Another of Amy’s favorites. Part rock and part soul, it builds and builds.

All My Exes Live in Texas – George Straight

No contest! A country classic about the past loves of a no-good rambling man.

Well outside of their usual setting, the Beach Boys nonetheless pull off a upbeat number about the fun to be had in Salt Lake City.

This standard has been performed by any number of artists, but our favorite is Ella Fitzgerald’s version with Louis Armstrong.

The Foo Fighters slowed way down and mellowed out for this one, and the results are beautiful. Are the lyrics about a place? About a woman? It’s worth a listen either way.

Seattle’s Macklemore scored a bit hit with this tribute to shopping at secondhand stores.  If it’s not in your head already, it will be now. (warning: explicit lyrics)

This classic is John Denver’s second entry on our list. It’s sweet and unabashedly sentimental in the way that nostalgia often is.

The life-and-death circumstances of many immigrants and pioneers in American history are captured by this haunting bluegrass number.

The Hills of Wyoming – Gene Autry

For the final entry on our list, singing cowboy Gene Autry gives us an old-fashioned, twangy ballad. Doesn’t get much more American!

Nathan is one half of newlywed travel couple Two Drifters, and typically found behind the camera lens. However, he loves writing too, and works as a freelance editor when not focusing on crafting works of fiction.